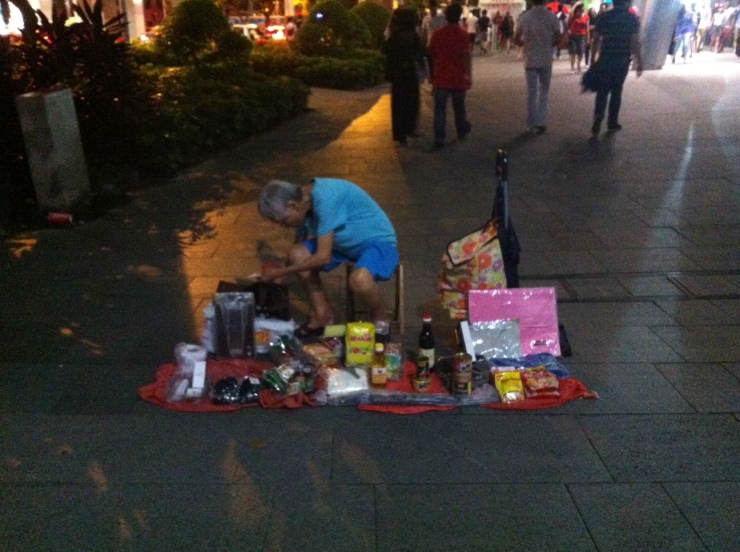 Amidst luxury brands and high street stores Singapore’s Orchard Road is famous for sits an old lady just outside Mandarin Gallery peddling an assortment of eclectic wares. From packets of tissue paper to a bottle of dark soy sauce, I always wondered why she chose such a spot (without shelter) to sell her stuff. But she was one of those people at the back of my mind. I never cared for more than five minutes, sometimes stopping to pass her some spare cash on hand.

This night was no exception. After meeting some friends for dinner, we were on our way to the MRT station when we passed by her makeshift stall again. On impulse, I reached for some cash and stuffed it in her hands, walking away quickly without really making eye contact.

It was then a friend said, “Maybe you should write about her. I wonder what her story is; why she chooses to sell her things on Orchard Road.”

I hesitated. As a journalist, it is an occupational hazard to be inquisitive. I didn’t want to intrude, and besides I wasn’t sure if she would agree to an interview. Making excuses, we walked further away from her and once again I tried to put her at the back of my mind.

But I didn’t succeed this time around.

After a detour into Forever 21 and H&M, I simply couldn’t forget how the old lady held her pride like a prize. Even though I passed her some money before, she insisted I take something from her selection of goods. I chose a packet of Nestum cereal before walking away.

This time, I walked back and was surprised to see she was still there, even though it was already 10.30pm. Slightly embarrassed, I asked if I could sit next to her for a chat.

“Sure! I don’t have a chair for you though,” she says cheerfully in Mandarin.

“Aiya, don’t worry about it! I’m happy to sit on the floor,” I dismiss her concerns about the lack of a chair.

And so we talked. About lots of things. About the rising cost of living, about how medical costs are getting more ridiculous, and as with almost everyone in Singapore she had her misgivings about the government. She asked if I believe in a God; I told her I believe in Jesus. And that was that. The conversation meandered to other things.

As it turns out, she’s 83 years old. Rain or shine, she sets up her stall from about 11am outside Mandarin Gallery. If it rains, she moves to the sheltered area.

“The economy’s very bad,” she says. “No one’s buying anything.”

She shows me her weathered hands, swollen and tender from years of arthritis. Apparently years of western and traditional Chinese treatments have not helped. Her fingers are furled, unable to be straightened.

“These things are heavy,” gesturing to her plethora of goods – a can of curry chicken, a black bra wrapped in a clear plastic bag with the tags still attached, a few packets of instant drinks. “When I carry them all home, my hands hurt.”

Sitting there with her was a humbling experience. I didn’t care much for my surroundings, except when people stopped and stared. I was slightly indignant that people should stare as if chatting with someone is a spectacle, but I am no one to judge. I have no idea what went through their minds.

Singaporeans are not known for their warmth. If anything, we’ve been voted as the unhappiest country. According to that Forbes report,

“So Singaporeans are prosperous but unhappy? Overworked, but comfortable? What would you rather be?”

Maybe that contributes to our apathy.

But I witnessed a few incidents that night that told me otherwise. A man who looked to be in his early twenties bought a bottle of oil for $10. Another teenage girl ran up to the old lady, stuffed $2 in her hand, and ran away looking slightly embarrassed. A middle-aged man wrapped a doughnut in a piece of newspaper and passed it to the old lady.

I just had to smile.

At about 11pm, she began packing up her stall preparing to go home. Seeing as her trolley looked rather heavy, I offered to give her a lift home.

“No need lah, it’s easier for me to go home at night. Not so many people. Coming to Orchard in the morning, that’s more difficult. A lot of people want to come here,” she waves off my offer.

Before I took my leave, I asked if we could take a photo together for memory’s sake.

“Aiyo, my hair very messy leh! You sure not?”

And so we took this photo together.

Thank you, auntie, for teaching me that we are all one and the same. Thank you for taking the time to chat with me; thank you for not looking down on me on account of age or ignorance.

We are not all heroes. That Saturday night, I learned that giving a little love away can be more precious than anything else. And if we can, let’s stop. Smile. Say hello. Even if it’s a little embarrassing. Even if it’s not something you’re prone to do. (:

P.S. If you ever see her along Orchard Road, please help her out by purchasing something if you can. (: